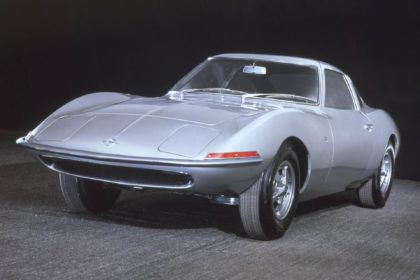 Between Porsche and Mercedes, Germany has produced more than its fair share of sports cars over the years. BMW, Volkswagen and Audi have contributed their fair share, too. But this year marks the landmark anniversary of another German sports car.

The Opel GT first began rolling off the assembly line in 1968, and it must have seemed as incongruous for the marque then as it does now. Typically focused on mass-market vehicles, the GT was an exceptional high-water mark for Opel.

Its gestation began in 1962 with the first design sketches. The project was developed in secret for three years until the first prototype was ready not only to show to the press and the world, but to Opel’s own management. The initial show car that debuted at the Frankfurt Motor Show in 1965 was, in Opel’s words, “the first concept car from a German manufacturer.” And it was the product of “ the first design centre of [a] European automobile manufacturer.”

A pint-sized classic
Three years later, production began. The GT was about the size of a Mazda Miata, and weighed about the same as the original NA, too. It offered a choice of four-cylinder engines: a 1.1-liter unit with 60 horsepower from the Kadett, or a 1.9 with 90 hp from the Rekord. Buyers could also choose between a four-speed manual or a three-speed automatic. The former was more popular in Europe, the latter (lamentably) more widely accepted in America. That’s right, Opel sold its cars in America back then, and not rebadged as Pontiacs, Buicks or Saturns, either.

The (relatively) more powerful of the two powertrain options propelled the GT to 62 mph (100 km/h) in 11.5 seconds and on to a top speed of 115 mph (185 km/h). Hardly record-breaking figures, sure. But bear in mind that the four-cylinder Porsche 914 that debuted the following year took even longer (13.3 seconds) to get up to speed, and only topped out a click and a half faster.

Opel even toyed with convertible, diesel, and even electric versions. The founder’s grandson Georg von Opel set several world records in a battery-powered prototype, and a diesel prototype set even more. Ultimately, though, no such versions made it into production.

At the end of just five years, Opel produced 103,463 examples. Half a century later, that wouldn’t amount to one tenth of the vehicles it produces every year, even without the US market. All the same – or perhaps even more so as a result – the GT’s place was cemented in history.

The second (and final?) coming
Opel revived the nameplate in 2007 for its version of the Saturn Sky/Pontiac Solstice roadster, but it only made 7,500 of those in little over two years. Another concept debuted two years ago, but so far hasn’t been given the green light. Here’s hoping Opel’s new French parent company will revive the original’s spirit with a modern successor.